I expected to have a rough time when our daughter left for college, but am finding that I am doing pretty well with the adjustment. However, Sunday mornings catch me off guard. The first Sunday morning tears streamed down my face the entire time of worship and prayer. Which was weird because I had felt fine as I walked into church. Then the next Sunday I made it through worship but tears resumed their trail down my face while our pastor prayed. Hmmmm…What is going on? I wondered.

Then I realized t

hat for the last fifteen years, Sunday mornings have been a time for our family to all be in one place, worshipping with the same music, agreeing in prayer over the same prayers, hearing the same message and then sharing thoughts over lunch. One place…all of us. Almost every single Sunday. Now, one was missing.

Courtney was home the next two Sundays so those Sundays felt “normal”. Then she was back on campus this past Sunday. The worship song was Our God is Greater by Chris Tomlin. When we sing this song I most often think of our adopted son and am reminded that God is greater than any past or present force that is against him, and I claim these words as truth and victory.

Today as I was thinking of him, my mind suddenly shifted to Courtney and then I could not stop smiling as I was quickly filled with joy! I felt in that moment that she was in church som 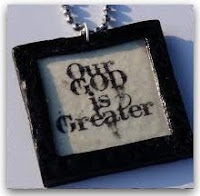 ewhere and that she was indeed worshipping God along with us. Maybe not with the same song, and there would be different prayers, as well as a different message. But our God was greater than any distance, greater than any force that could separate her from 15 years of building that relationship with Him.

I found out later that afternoon that she indeed was at a church,
worshipping at the same time. Seriously, our God is awesome.