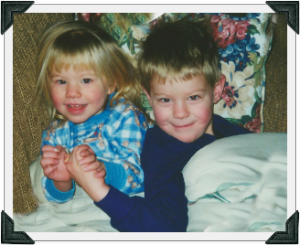 Late night hushed voices and loud laughter have sent me upstairs to quiet these children of mine so many times over the years I’m sure I could not count the steps I’ve climbed or the times I’ve uttered the words above. But this weekend was different. 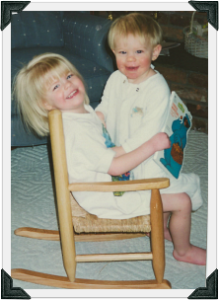 er weekend brought Courtney home from college and the late night voices were floating through the house again. As they’ve gotten older, and these times when they are together are dwindling, I can feel the switch from mild irritation and concern for enough sleep, to a tender heart, grateful for these sibling relationships that are still being grown and nurtured.

Good sibling relationships were of high value to me from the very beginning. While growing up I d

idn’t feel intimately connected to my sisters or brother, and I had a longing for that to be different for my own kids. So I was shocked when toddler Courtney began knocking baby Zach over just as he was beginning to learn to sit up all by himself! That alone sent me to a parenting class to figure out what to do! As they got a little older I also found myself at a parenting workshop to learn what to do about sibling rivalry. I knew I needed to learn how to draw them to each other instead of me constantly separating them.

I’m no expert, but here are a few things I’ve learned along the way ~

When they are yo 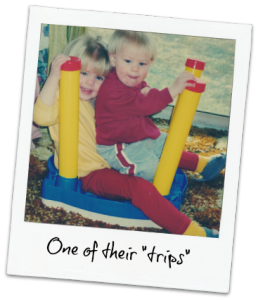 ung jealously can look a lot like mean. I learned that engaging Courtney in a level of care for Zach was part of the solution to her knocking him over. She was less likely to want to hurt the one she was caring for. This meant letting her feed him his dinner (which also meant being patient because this also meant the process was messier and took more time!) I also let her help me bathe him and assist w

ith a change a diaper here and there. The other part of the solution was making sure she and I got some alone time without the baby – she needed to be assured that she still had her very own place in my heart, independent of that new baby who seemed intent on sticking around!

I learned quickly (well, after the sibling rivalry workshop) that to encourage cooperative playtimes I needed to play with them or play a game with them so they would experience a fun time together. Once those feel good brain chemicals were off and running they had a much easier time transitioning to playing without me. The goal was for them to learn to lean on each other for fun; my job was to show them that was possible.

During this time period I would set the stage for a good time. Sometimes I was down for a tea party, but my kids  l o v e d  tea parties, and

I just didn’t have it within me to attend each and every one. Plus – I wanted them to develop friendships with each other – independent of me. That meant I would set up tea parties for them, call them when it was ready and then exit the room. A big box arrived and the next day I gathered markers and crayons for them and left as they transformed that box into a car that carried them to grandma’s house 600 miles away! I also found a clean and organized playroom promoted play much more than the chaotic mess we sometimes left it in. 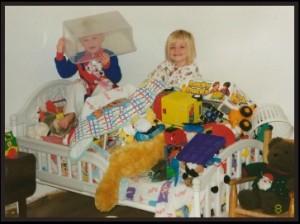 As they got a little older and one of them was involved in a sport, school play, band or choir performance, we went as a family and we all encouraged, watched for, and applauded the one participating. (I believe that might seem more of a challenge today with smart phones and tablets at our disposal, it seems easier to hand the other kids devices to keep them quiet and occupied. But learning the life skill of waiting patiently and supporting your sibling – even at the cost of a little boredom is important to developing relationships. This also gives developing brains time to develop without constantly needing a ping.) We also always got ice-cream in celebration of the one who was in the play, band or choir concert – we would each let the star know just how great they had performed!

The other area that was vital to them developing their own relationships was (and is) learning to resolve their own conflicts. Let’s face it; no relationship is sustainable 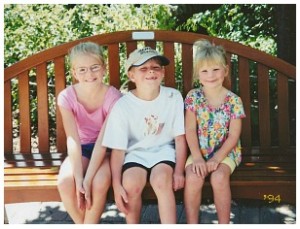 if it collapses whenever problems arise. My oldest possessed natural abilities in this area so I’m not sure I can take a lot of credit. I remember one day when they were driving their cardboard car to grandma’s house, Zach wanted to take his big stuffed dog, Courtney said no and he walked away and said he wouldn’t play. She stepped back and I watched her consider and ponder, she really wanted him to play with her, so she sacrificed what she wanted to keep him engaged, the dog got stuffed in the car off they went on their adventure! (He was 2, she was 4 ½) It’s not easy to know how to navigate tricky conflicts but just being aware of the need to teach negotiation, taking turns, selflessness and asking “how can we solve this problem” may be helpful.

We’ve have had lots of people comment for many years on how well our kids get along, I promise you, we didn’t do it all right 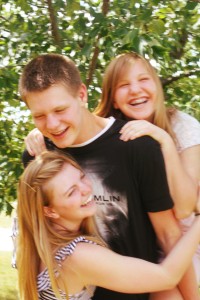 and I’m certain we did plenty wrong. You don’t have to do what we did, you probably have some incredible ways you are developing your own children’s relationships (please share through comments!). But this weekend as I listened to our almost 22 year old shar

e something important with her 19 year old brother, and as the almost 17 year old displayed her dismay when she discovered that while she was out with friends Saturday night the rest of us had gone out to dinner, as they laugh and play, and talk late into the night I thought it was time to share some of what we did to intentionally foster these friendships that just keep growing deeper.

Late Saturday night, upon hearing the hushed conversation, I climbed those stairs, though I had already given and gotten good night hugs. I sat on the bed opposite Zach 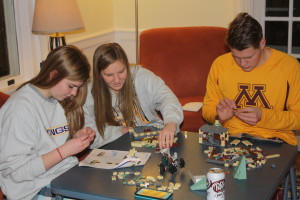 and Courtney and shared in a wee bit of the conversation, and then I gave one last hug and left the room as their conversation went on and on…independent of me, just like I hoped all those years ago.

2 thoughts on “I Wanted More than Just Getting Along”